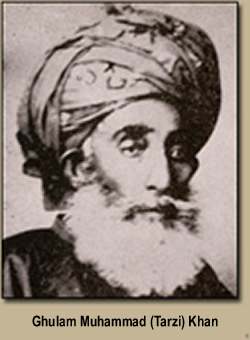 His first wife ; (bobo jan)belonged to the Barakzai family of Rahimdad (brother of Sardar Painda) and was the mother of Gul Mohammad Khan, the eldest son.

His second wife ; Marwarid Begum, was the daughter of his uncle, Mehrdel ( and sister of governor Sher Ali) who gave him two sons, Muhammad Zaman Khan and Muhammad Amin Khan.

His third wife ; Sultanat Begum, (shahzade saddozai)belonged to the Sadozai dynasty and was the mother of Mahmud Tarzi. Ghulam Muhammad Khan was closest to this wife.

His fifth wife ; Narinj khanum (kohistani surati) was from Kohistan. She was the mother of AbdulKhaleq Khan.