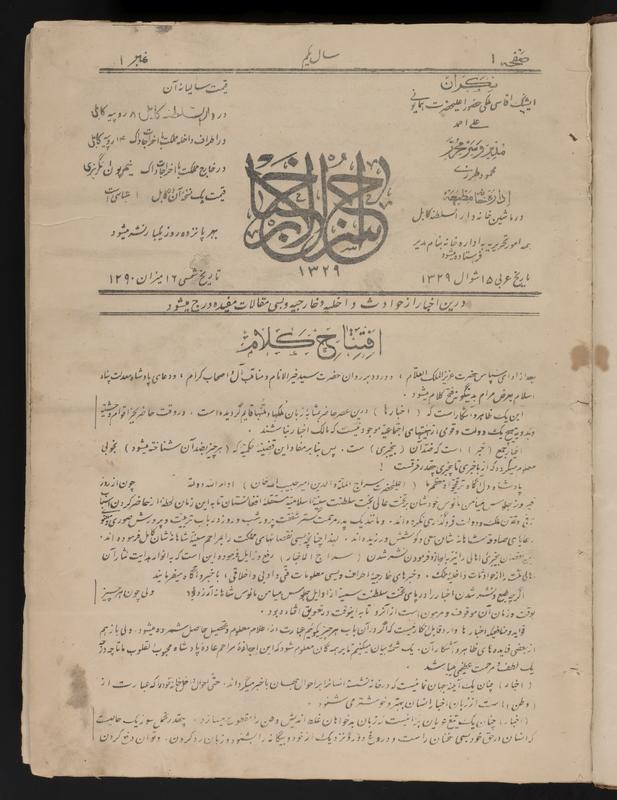 "...The Afghan magazine Seraj al-Akhbar (lamp of the news) of Mahmud Tarzi became an influential platform of the movement..and he fought with the British in India, with his pen in this newspaper..."

"..There were political societies as early as 1911, including the Young Afghan Party centered on the personality of Mahmud Tarzi, and his weekly journal Seraj al-Akhbar"

In Afghanistan, Tarzi was editing the country's only newspaper, Seraj-ul-Akhbar, and still urging toward modernity, often in the guise of the satire.

"Asia for the Asians"was the motto of the newspaper and it was considered that all the publications of Young Bokharans, Young Khivans...and the Young Afghans was the best. Aman Ullah was a young Afghan and with his brother Inayet Ullah who was the director of publications and whose house held the modern printing press which Amir Habib Ullah was persuaded to import, Aman Ullah spent much of his time at the newspaper office that he met Tarzi's daughter Soraya.

During the war,bursting forth in Europe, Seraj-ul Akhbar began to call England and Russia "mortal enemies of Islam." It said that the traditional protection granted by the English to Moslems had been transformed into a policy of frank hostility to the Moslem element .England,it said,had begun the war from envy of Germany. All german military resources, or rumors of them, were described by Seraj-ul Akhbar with enthusiasm.