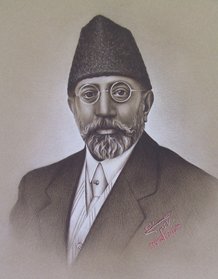 His Struggles In Afghanistan

"The ways of the British are inscrutable but they always seem to obtain their own ends without compromising their dignity or their honor" Mahmud Tarzi, Oct.28,1919

When the subject is Mahmud Tarzi, it should be understood that he is a leader-minded person. During his active periods he became the leader of his people but he was mostly at the backstage. However,his ideas and advises were always in front to be used. He was always sure what he was saying and doing, because he was a good observer, a patriot and looking always ahead, knew a lot about history, lecture, politics and he was a man of trust. You can see and understand his nature was full of energy to be used for his country to make Afghanistan as a state "one nation / one country". He used his pen as a man of letters. A prominent nationalist who devoted his considerable talents to the achivement of Afghan independence.

At the crossroads of Central Asia and as the main land route between the east and west, Afghanistan has drawn trades,warriors, travellers through its rugged terrain from time immemorial. The time when King Aman Ullah took charge of foreign policy with under the Mahmud Tarzi's consultancy as Secretary of State was a period of modernisation. Unfortunately the reforms having met opposition from religious and tribal leaders and as Mahmud Tarzi once was saying " some actions were done impetuously, before their time arrived". He was a leader who was awakening his people with his writtings, his words and with his talks.

In this chapter we shall find more about his works ,what he had done for Afghanistan's developments, during the years of British and Russia were much interested with this country.

We shall be pleased to receive any more information,discusions or advises, articles and documents which can be sent to us in order to know more about this great Afghan as well as about Afghanistan. Please send your messages via our contact page. Thank you in advance.

"....Little is known about Mahmud's occupations during his first years in Kabul. He established the Office of Translation ( d‚r ut-tarjama ) with its offices in Garden of Quest Houses ( B‚gh-e mehm‚n-khana ), taught history and geography at the Military school for one year, and travelled in the country with the Amir Habibullah. But, anxious to make a name for himself, he gathered some young friends around him, continued to write and, above all, prepared for the publication of his major work, Ser‚j ul-akhb‚r. ( more information given previous chapter.Published first in 1910 and became revolutionary newspaper. Habib Ullah supported Tarzi to publish this periodical in order to needle the British government of India in return for its attack on him at the beginning. Tarzi attacked both European imperialism and resistance of Muslims with his newspaper ).

Mahmud was fully occupied with the composition and publication of this important periodical until nearly end of the Habib Ullah's reign. After Aman Ullah ascended the throne, Tarzi, who was father-in-law, became Minister of Foreign Affairs.

In this capacity he presided over the independence negotiations; later he was appointed minister in France. In Kabul, he lived at first a few steps away from the Ministry and from the palace in a place called Gerdan Saray, and later in an apartment on the wall surrounding the palace grounds, Borj-e Kampunir .

...... Mahmud Tarzi had been a passionate reader from his early youths. He read mainly Turkish authors also European works already translated into Turkish, and he soon enjoyed translatting some of them into Persian."

We shall come back again to Ms.Schinasi's work later.

From the Wahab Tarzi's work; "...Following the set back in Mahmud's efforts to have a group of Turkish experts work in Afghanistan, the Amir Habibullah had no choice but to employ teachers and experts from India. He asked Dr. Abdul Ghani, who had been appointed by his father as his physician towards the end of his reign, to remain in order to establish a modern school. The doctor hired a number of teachers, including two of his brothers, and opened the Habibia (Serajia) School. Mahmud's intellectual and cultural accomplishments began with the translation of scientific novels by Jules Verne, the celebrated French writer. Amir Habibullah ordered the establishment of a translation bureau under the direction of Mahmud beg, to be housed in one of the halls of the government guesthouse. This was an elegant building of the Amir Abdur-Rahman era, located in the middle of a lovely green garden(today is mayor office). Two clerks with fine handwriting were appointed to prepare fair copies from the rough drafts. The novels, "Hidden Island" and "Twenty Thousand Leagues Under the Sea" , "From the Earth to the Moon " and "Around the World in Eighty Days" were translated one after another. The elegant handwritten copies by Merza(scribe) Mohammad Aziz, who not only had a beautiful handwriting but a ready wit and poetic disposition, would be rushed to the Amir. This represented an important innovation compared to the prevailing, classical story-tellin and limited reading material. Years later, their publication created an excitement among the enlightened youth."

Holding these memoires here for a while and see more about his political works and we shall continue Cultural and Literary Endeavours of him again.

He was high government official during the reigns of Amir Habib Ullah and made healthy contacts with Ottoman Turks. He invited them to Afghanistan and  and his son King Aman Ullah.

He was a trusted adviser to Amir Habib Ullah . That time no Cabinet of Ministers existed, but only informal advisers, up to 1919 .

He was Foreign Affairs Minister in 1919 to 1922 . During this time third Anglo-Afghan war began in May 1919 and led to the independence of Afghanistan on August,19, 1919. Britain bombarded Kabul and Jalalabad, one and a half tonnes of munitions rained down to Jalal-abad in a single day. (see more in "the fights and writings of Mahmud Tarzi About the Freedom and Wakening of the Motherland" begining of his bio.)

He was appointed head of Afghan Delegation at the peace conferences at Mussoorie 1920 and Kabul 1921. Of course British was not happy to meet again with Mahmud Tarzi and made all kind of tactics to reduce Mahmud Tarzi's energy in order to get more then what they supposed to get from this conference.Travelling to Mussoorie, train rushed through the urban centers, refueling at lonely by-stations. The British took these programme because they feared repetitions of the anti-imperialist riots which swept India at the end of World War I when it became obvious that "self-determination of nation" applied only the smaller European ethnic and geographic units. But in Lahore, while they were passing, brought hundreds of cheering Indian nationalists to the station as the train passed.

A most unusual confrontation took place daily at the Mussoorie conference. After four months the conference broke up because of the Durand Line - pashtuns teritory agreement. Sir Henry Dobbs led the British delegation to Kabul in January, 1921 and Mahmud Tarzi headed the Afghan group. After 11 months of hard discusions the British and Afghans signed a peace treaty normalizing their relations. At the end of the conference winner was Afghanistan. Agreement accepted without conditions by British and Afghanistan announced its independency. Further more British sent a letter to Mahmud Tarzi giving their good will toward all the frontier tribes.

He was the first Afghan minister at Paris , France on 1922 ñ 1924 ( see more about this event "the fights and writings of Mahmud Tarzi About the Freedom and Wakening of the Motherland" begining of his bio.) He,then worked hard for further cultural relations with France and in September 1922 the French and Afghans signed a protocol which created the Delegation Archeologique FranÁaise en Afghanistan. Istiqlal College, a French speaking high school openned and many Afghan students had attended universities in France.

He was Foreign Affairs Minister on 1924 ñ 1927, again . But many things were going wrong and anti-Amanullah religious leaders were on actions and as a result Mahmud Tarzi resigned in mid 1925, not able to make more pressure to the King about the present situation. ( There are more to say about these years in Afghanistan and friendly but serious talks between Atat¸rk and King Aman Ullah about the reforms etc. This ,we believe is an another issue to discuss in another platform. )

He preached reform all his life, but always recommended a good foundation.

In foreign policy, Tarzi suggested a balance between British and Russia.

In January 1927 he left Kabul for medical treatment in Europe. He then proceeded to Herat with King Aman Ullah, after his return from Europe and went to Turkiye in 1929.

During the anarchy, on 1928, created by British in the country and started in Kabul, his son A.Tawab was in the army and fought Habibillah- Kalakani (son of watercarrier) . ( see more in Queen Soraya section )

A tired Mahmud Tarzi rested ten months at Shimran, outside of Teheran before going to Turkiye.. He quoted the great Persian poet, Hafiz, to explain his inaction; " We have not come here in pomp and show, we have taken refuge in this place from unfortunate events".

Mahmud Tarzi lived mostly in thought and partly in action.