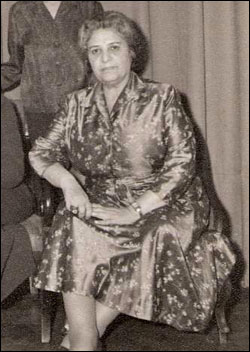 Horiah Tarzi, second daughter of Mahmoud Tarzi, was married to Gholam Siddig Charkhi in Istanbul in 1934.

Prior to her marriage she lived with her sister Queen Soraya at the palace in Kabul until 1928. After her marriage she lived in Berlin - Germany with her husband.
Ghulam Siddig Charkhi, son of Sepah Salar Gholam Haider Khan Charkhi, Commander in Chief of the Afghan army under Amir Abdurrahman Khan.
Gh. Siddig Charkhi served as Afghan ambassador to Germany, private secretary to HM King Aman Ullah and Afghan Foreign Minister successively from 1921-1928.He died in Germany 1962 and buried in Afghanistan.
Huriya Khanum spent her last days in Istanbul with her brother&sisters and died there, in 1982.

They have two sons; Ahmad Siddig, an attorney at law living in Berlin Germany and Zaid Siddig, Dipl.Ing Geology, lives in the state of Connecticut, USA.