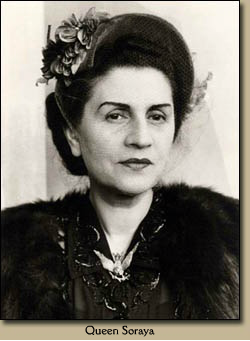 Nobody can doubt that Queen Soraya was the most eminent woman of Afghan and Oriental history. It's worth remarking that she is the only woman to appear in the list of rulers of Afghanistan.
Born in Damascus, Syria on the 24th November 1899. She was educated by her father Sardar-i Ala Mahmud Tarzi. Her mother was Asma Rasmiya, daughter of Saleh Muhammad, a Syrian businesman who also was the muezzin of the Omayyad mosque in Damascus. Rasmiya Khanum was an intellectual woman and wanted her children to be brought up that way.
After they return to Afghanistan, (Mahmud beg was invited to Afghanistan by Amir Habibullah Khan) they were often received invitations from the Court, where Soraya met Prince Aman Ullah, son of the Amir Habibullah Khan. They struck an affinity. The prince who was a sympathiser of Mahmud Tarzi's liberal ideas,he and Soraya were married in 1913. When Aman Ullah married Soraya, he followed Tarzi into monogamy as into so many attitudes and Soraya was Aman Ullah's only wife!
When the prince became Amir in 1919 and subsequently King in 1926, the Queen had an important role in the evolution of the Country, always close to her husband. He wanted her to take part in all national events. He was saying;” I am your king, but the minister of Education is my wife your Queen...”
Queen Soraya was the first moslem/muslim sovereign who appeared in public together with her husband. She participated with him in the hunting parties, riding on horse back. She was present at Military Parades with the king and Queen mother “Ulya Hazrat”.
During the war of Independence, she visited the tents of wounded soldiers, talked to them, offerred them presents.
She accompanied the king even in some rebellious provinces of the country which was a very dangerous thing to do at that time !
Being a convinced femininst, like her mother, they were both very important figures of Afghan women's emancipation during her reign.
In a speech in 1920, at a women's reunion, she mentioned the great progress of women in all the world, comparing them to those of Afghanistan. "You, Afghan women, you represent fifty percent of the population of this country but you receive very little consideration in your country. You must emancipate yourselves, learn to write and read, take part in the events of our beloved country, under the quidance of your king."
In 1921, with the help of her mother Resmiya khanum and Princess Kubra, sister of the King, the Queen created an association for the protection of the women .“Anjuman-i Himaya-i Niswan.”
At the same time a weekly magazine “Ershad-un Niswan” (the guide for women) was published by her mother Rasmiya Tarzi. Ershad-un Niswan, which was the first magazine for women, concerning women's rights, nutrition, children's care etc...
A school for young girls “Masturat” was opened in 1921. It was situated in a charming pavillion within the royal palace compounds of “Gulestan Sarai” (flower's palace). The Queen was the president and the inspector; “Mufattisa” . Her mother was the director “mudira” and the Queen's eldest sister Princess Khayria, assistant director : Naib-e Mudira.
The number of pupils increased very quickly and there were five classes at the beginning “Ibtidaiya”. Then a secondary school was openned “Rushdiya”. In 1926, one could count 300 pupils and in 1928 almost 800 !
In many other districts of the city new schools and a hospitals for women, also named “Masturat” were opened. The Queen was so happy when the King signed a “firman” (royal edict) in 1927, obliging all the state's functionnaries to send their daughters to school.
During their six months official visit to Europe, the Queen was extremly interested to visit women's institutions, schools, hospitals, handicrafts and workshops to be adapted for Afghanistan.
Returning to Afghanistan from this long voyage, she wanted together with the King, to accellerate the modernisation of the country and the emancipation of the women, criticised by the religious chiefs.
In front of the National Assembly “Loya Girga” with King's order, she took off her veil, the liberalists applauded, but the fundamentalists, who were in majority, murmured .
This triggered the revolt of the religious chiefs against the King, fermented by the British. The latter did not wish to see a country with a liberal regime next to India.
In 1929 the King abdicated in order to prevent a civil war and went into exile. Their first stop was India (part of the British Empire). There, the sovereigns were applauded everywhere they went by thousands of Indian people who felt they had lost their dream of freedom and liberation from the British Emperialism. There was also ovation from the Indian women who were crying and shouting the name of “Soraya” without mentioning “Queen”, just Soraya !
At Bombay, the Queen gave birth to a baby girl, named “India” as it was the wish of all Indian doctors and nurses of the hospital. (for more see India, below)
Queen Soraya lived in Rome with her family in exile, having been invited by king of Emanuelle,Italy  which was Monarchy at that time. During these periods she was travelling to Istanbul/Turkiye, to visit her sisters and brothers. During this trip her aids were Sahab and Ömer Tarzi.
She died on 20th April, 1968 in Rome,Italy.
The funeral was escorted by the Italian military team to the airport of Rome, before being taken to Afghanistan where a solemn state funeral was held.
She is burried in the family mausoleum in Jalalabad, next to her husband the King, who has died eight years earlier.
Queen Suraya and King Amanullah had 10 children ;
H..R.H. Princess Amenah Sha Begum
H.R.H. Princess Abedah Bibi Shirinjan
H.R.H. Princess Dr. Meliha (D'Afghanistan) Söker
H.R.H. Prince Rahmat Ullah ( Crown Prince )
H.R.H. Prince Saifullah / died young from cholera
H.R.H. Prince Hymayat Ullah 1924 - died young from bronchial pneumania
H.R.H. Princess Adelah ( Angelini )
H.R.H. Prince Ehsan Ullah
H.R.H. Princess India D'Afghanistan
H.R.H. Princess Nagia ( Dogan )