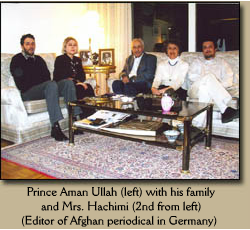 Aman Ullah travelled and studied in different countries because of his father's jobs in several locations.

He started horse back riding since he was 7 years old. He followed his grandfather and his uncle Sahab to be a good rider and received support especially from his grandfather Tawab Tarzi. He underwent two years of training and became a horseback riding teacher. He works in one of the riding school in Geneva. He participated as a player in buzhkhaci/ the old traditional Afghan game with riding horse back in Algeria.He speaks Dari,Turkish,English and fluent French.