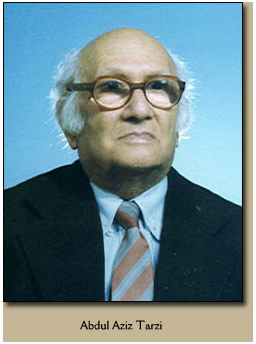 Kabul 1911 – 23 May 2003 Istanbul ; Artist
Abdul Aziz was Mahmud Tarzi's seventh son. He studeid until 4th grade in Habibiya School in Kabul. In 1920, his father was sent to Paris as an Ambassador of Afghanistan, so he and his family moved there. He and his younger brother Kader,studied in Lyceé Jonson de Sailly as boarding students for eight years. At that time, because King Aman Ullah was overthrown in his absence in Afghanistan, Mahmud Tarzi and his family moved to Istanbul. Aziz and Kader went to Rome to stay with their sister Queen Soraya. They finished high school in Lyceé Chateabrilliant in Rome.
In 1930 they came to Istanbul. Aziz studied in the Academy of Fine Arts and graduated in 1947. As an Artist , he opened many Art Exhibitions in Istanbul. In 1953, he married Necla and in 1954 they moved to Kabul. Their son and daughter were born there. Aziz worked in the Ministry of Tourism with his elder brother Abdul Wahab for 25 years. He also taught Art in High Schools in Kabul. After the socialist revolution in 1978 Aziz and Necla moved to Istanbul. He died on May 23, 2003 in Istanbul.
Necla Tarzi , the daughter of a prominant family in Istanbul was  born in 1925 . After moving to Afghanistan with Aziz in 1954, she became a school teacher in Turkish Community School in Turkish Embassy and taught there for more than 20 years.
They have a son  Halil and a daughter Muazzez.