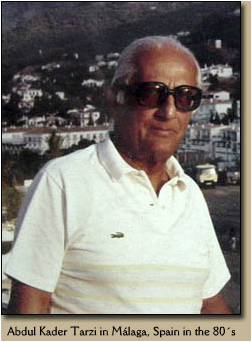 He finished elementary school in Kabul . He continued his education at Lycee Janson de Sailly between the years of 1922-1928 in Paris while his father was the Afghan Ambassador in France. When the family moved to Istanbul,Turkey he completed his baccalaureat from College St. Joseph in Istanbul. He lived in Istanbul with his family for some time and then moved to Berlin for 2 years to his older sister's house. He came back to Istanbul and resumed his baccalaureat until completion in 1941. He obtained his M.A. in French Language & Literature from the University of Istanbul in 1950 and he returned to Kabul in 1951. Abdul Kader was the Official of Ministry of Economy in Kabul from 1951 to 1953. He then became UNDP Administrative Officer in Kabul from 1953 to 1965. He was assigned to Turkiye in 1965 and worked as UNDP Administrative Officer until 1967 . He later went to Algiers as FAQ Administrative Officer in 1967 until 1973 where he met his future wife Martha Josefina Pineiro.

Martha was an Argentine lady born in Buenos Aires on 18 April 1937. She went to school in Buenos Aires and later traveled extensively and internationally with her family. Martha's father was an Argentinian Government Official and her brother was a career diplomat with consular positions in Algiers, London and Rome and subsequent Ambassadorial positions in Baghdad , the Middle East and Manila.

Martha and Abdul Kader were married in London on 12 August 1968. They went to Kuala Lumpur while Abdul kader was the UNDP Administrative officer from 1973 - 1975. He retired from UNDP in 1975.

They settled in Fuengirola, Malaga, Spain where he lived with his wife.

They have two sons; Karim and Omar