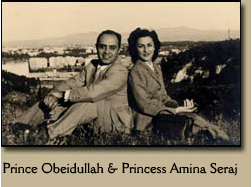 Afghanistan 17 April 1915 .
Amena Tarzi came to Istanbul with her mother Asma Resmiya Khanum, at the age of 14, on 1929, from Afghanistan. Early days of arriving Istanbul, they stayed first at Moda then moved to Tesvikiye.
In 1944, Amena Tarzi married Abdulmajid Abougil who was a Syrian origin businessman,in Istanbul. It was a short marriage and Abdulmajid Abougil died after six months. In 1947 she went to Rome to visit her sister Queen Soraya where she met Prince Obeidullah Seraj, youngest son of Amir Habibullah Khan and brother of King Amanullah. They married in Rome on 10 April 1948. They had their first child Habibullah, in Rome. Later they moved to Istanbul together with Queen Saadat Sarwar /Ulya Hazrad,(Kandahar 1876-1964 Istanbul) the mother of king Amanullah Khan and Prince Obeidullah.
Prince Obeidullah was born on 18 December 1915 and died on 14 December 1998 in Istanbul.

Pcess Amina died on 2nd May of 2012 in Istanbul.
They have 2 children;Habibullah and Simin.