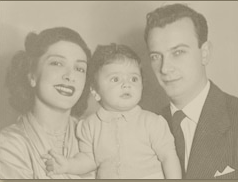 She was with her grandparents Sardar-i Ala Mahmud Tarzi & Rasmiya Khanum in Switzerland for a while. Accompanied her parents during part of their state visit to Europe in 1928 and exiled to Rome with her family in 1929.She completed her primary and secondary education at Florence and in Switzerland. She graduated from The University of Rome, Faculty of Medicine, 1945-1946 .

She got married to a Turkish Engineer A. Tahir Söker (he was close relative to the president of Turkiye,Celal Bayar) in 16.08.1948 and adopted Turkish nationality.Tahir Söker was born in Bursa 1921.He is a graduate of Liverpool University, Faculty of Engineering on 1942. He passed away on 2006

Dr. Meliha Söker, started her medical carrier as an intern at the Istanbul University, Çapa Medical Clinic in 1951 and obtained license in Obstetrics and Gynaecology in January 1955. She worked from 1956 to 1977 in SSK (Turkish State Social Security Administration) hospitals in several cities until she retired.

They have one son Sezai. He has a son Alp from his first wife and a daughter Begum from 2nd wife.