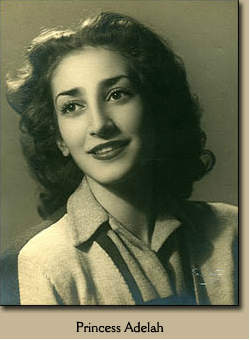 In 1929 she left Afghanistan with her family and went to Rome, Italy in exile. She completed her elementary and secondary school in Rome and in Florence; Princess Adelah successfully enjoyed painting and handicrafts since the age of seventeen.

Princess Adelah married Armando Angelini on October 30th, 1946. He was born in Rome, Italy on August 10th, 1924, Armando was the son of an Italian Cavalry general and was himself an officer of the Italian Cavalry. For a few years the couple lived in Colombia, South America where their first daughter Elisabetta was born. That same year the couple returned to Italy. Armando began working for the Bank of Santo Spirito; later he became general inspector of the same Bank for central Italy.