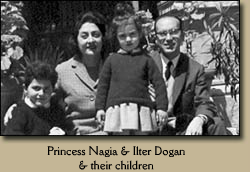 She is the youngest daughter of Queen Soraya. She was educated in Italian schools. During the second world war, she lived with her sister India for three years as she studied in a French school in Gstaad, Switzerland. In 1945 after returning to Italy, she continued her studies; in 1954, she graduated from the University of Rome, dept. of Foreign Languages and Literature. Then she worked as a teacher some private schools in Rome.

During one of her visit Istanbul, she met Ilter Dogan ,a Turkish businessman and got married to him on 12 December 1957. She lived in Ayvalik, a small town near the Aegean sea, because of her husband's family business.She accompanied her mother's funeral procession in 1968,and went to Kabul then Jalal-abad in Afghanistan.

She is one of founder members of Mahmud Tarzi Cultural Foundation(MTCF) and a head of Family Committee in the foundation. She visited Afghanistan with her husband on July 2006 together with her sister pcess India and cousin Omer Tarzi. She also participated two international forums of Mahmud Tarzi; one held in Kabul 2008 and the other held in Istanbul 2009.

Nagia and Ilter have two children ; Ömer, a son and Humeyra, a daughter and living in Istanbul,Turkiye.